We left off with Wang Geon ( 왕곤 ), later to be known as Taejo ( 태조 ), conquering Baekje and accepting the surrender of Silla in his quest to unite the Korean Peninsula.  The next phase of Korean history takes place under the reign of the Goryeo Dynasty, which ruled the Korea from 936 until 1392.  I am going to split this history into two parts, the first of which will cover Goryeo's history until 1170, which is the year that a military revolt took place within the empire.  So without further ado, let's delve into the first 234 years of Goryeo's unification of Korea.


The Growth of Royal Authority
The collapse of centralized power ultimately led to the undoing of the Silla Kingdom and Wang Geon was determined to avoid Silla's fate.  He established marriage ties with over twenty gentry families around Goryeo's capital of Songak and also provided positions for nobles from the fallen kingdoms of Balhae, Later Baekje, and Silla.  Wang Geon died in 943 and the years following his death were turbulent times marked by the Wang Gyu ( 왕규 ) rebellion and the extremely short reigns of the next two monarchs.  Clans were still very powerful at this point and it would take an equally powerful ruler to break the clans' hold on the Korean peninsula.

Gwangjong ( 광종 ) took the throne in 949 and began his attempt at establishing royal authority by enacting the Slave Review Act, which decreased the number of slaves owned by military commanders and local gentry and in turn also decreased their power.  He also created a civil service examination, which promoted people based upon skill rather than lineage.  He then began to call Gaegyeong (the name of the capital at that time) the "Imperial Capital" and the terms "Your Imperial Majesty" and "High King" came into use.  Understandably, the previously powerful military commanders and civil officials objected to these reforms and the end result of this discontent was a merciless purge by Gwangjong.  Anyone who refused to submit to royal authority met their ultimate demise.  Gwangjong's successor, Gyeongjong, also attempted to strengthen the throne by establishing the Stipend Land Law, but it would not be long before the Aristocrats fought back.


Establishment of the Aristocratic Order
Aristocrats still held a very important place in Goryeo's society and they were constantly trying to improve their social position through the use of marriage ties.  Marriage ties allowed families, in particular the the Kim family from Ansan and the Yi family from Inchon, to dominate power for extended periods of time.  The Kim family held power through marriage ties to the royal family from 1009 until 1046 and the Yi family was a political force from 1046 until 1122.

This inevitably led to a new political structure which was completed in 1076 and of course placed more emphasis on the aristocracy.  There were numerous political offices created for the aristocracy, the most interesting of which was the Surveillance Chancellery, whose primary responsibility was restraining royal authority.


Goryeo-Khitan Wars
The Liao Dynasty, made up of the Khitan people, was located in Manchuria and began near the end of the Balhae Kingdom in 916.  As stated in the post on the Later Three Kingdoms, Balhae was defeated by the Khitan in 926 and Khitan went on to become the chief opponents to Goryeo in the early years of its empire.

The First Goryeo-Khitan War
The first conflict occurred in 993 when the Khitan invaded Goryeo with 60,000 troops.  The conflict was short-lived and the Khitan withdrew its forces when Goryeo agreed to end its alliance with the Song Dynasty in China.


The Second Goryeo-Khitan War
The Khitan attacked again in 1010 and succeeded in occupying the Goryeo capital and forced King Hyeonjong to flee.  However, the Khitan became fearful that their supply lines would be disrupted and decided to once again withdraw their troops.

The Third Goryeo-Khitan War
The final attack by the Khitan occurred in 1018 after Goryeo's refusal to cede territory and submit to their rule.  The Khitan attacked with approximately 100,000 troops, but Goryeo countered with over twice that amount.  The Khitan suffered a significant defeat and a peace treaty was eventually signed four years later.


Problems with the Aristocratic Order
The aristocracy continued to consolidate power for the next hundred years, but power struggles arose amongst the ruling clans.  The rule of Injong ( 인종 ), which lasted from 1122 until 1146, was particularly marred by these power struggles.  The first man to vie for power was named Yi Ja-gyeom, who was the father of two of Injong's queens.  He held political power during the beginning of Injong's rule, but ultimately desired to usurp the throne.  He attempted a moderately successful coup in 1126, but Injong was able to regain power in 1127 and Yi Ja-gyeom was banished from the capital.

The second revolt during Injong's reign occurred in 1135 and was led by a Buddhist monk named Myo Cheong.  Myo Cheong had previously advised Injong to move the capital to modern-day Pyongyang in an attempt to seize the power of the throne.  He also wanted Injong to attack the Jurchens (who were located in Manchuria), but Injong refused and as a result Myo Cheong raised an army in Pyongyang and created his own state.  The insurrection was short-lived, but it once again demonstrated the decrease in royal authority.


Culture and Society
Buddhism
The Seon School and the Gyo School were the two primary modes of thought within Buddhism during this time period.  The Cheontae School later arose as a way to reconcile the differences between Seon and Gyo.  Despite the rise of Confucianism during the Goryeo Dynasty, it remained a thoroughly Buddhist state.

Confucianism
Confucian ideology prospered under aristocratic rule and the introduction of state examinations provides ample evidence of the power that Confucianism wielded over Goryeo.  This time period was marked by a more rational approach to contemporary problems.  Confucianism would one day be used to suppress Buddhism, but during this time period both thought processes coexisted.

Literature
The most impressive work produced was the Buddhist Tripitaka, which consisted of Buddhist scriptures printed on woodblocks.  This project was undertaken as a prayer for the purpose of bringing an end to the Khitan invasions.  Unfortunately, the original Tripitaka was destroyed during the Mongol invasions during the thirteenth century, but it was later remade and the extant version is generally regarded as the finest collection of Buddhist scriptures in East Asia.

Art
Goryeo's celadon ware is the finest example of the dynasty's cultural achievements.  Goreyo celadon was utilized to make numerous items and was influenced primarily by natural themes.  The celadon ware is said to display Goryeo's appreciation for elegance, while also expressing its grace and charm.

Education
A huge change in the educational system took place with the establishment of the National University in 992.  The university consisted of six colleges and the entrance requirements for each college were dependent upon lineage.  University College, High College and Four Portals College emphasized study of the Chinese tradition and were the most exclusive schools.  The Law College, the College of Calligraphy, and the College of Accounting were available to the lower levels of the aristocracy and to the commoners.  While this was a huge step forward for the educational system, it was not until the reign of Injong (1122-1146) that schools were set up outside of the capital and education started to become more widespread.
Posted by J. Hill at 23:48 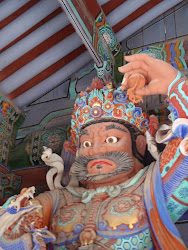 J. Hill
I graduated college in May of 2010 with a degree in Aerospace Engineering. So naturally I decided that the best career path for me would be to teach English in South Korea. I'm not really sure how I ended up here, but I've had an amazing time so far and I have so many places that I want to visit before the end of my yearlong teaching contract. I am planning on traveling pretty much every weekend and I will certainly update the blog after each adventure.

Places I want to visit (How many weekends)

Do People Read My Blog?